Advertisement
Posted on 26. September 2022 by Vorleser 0 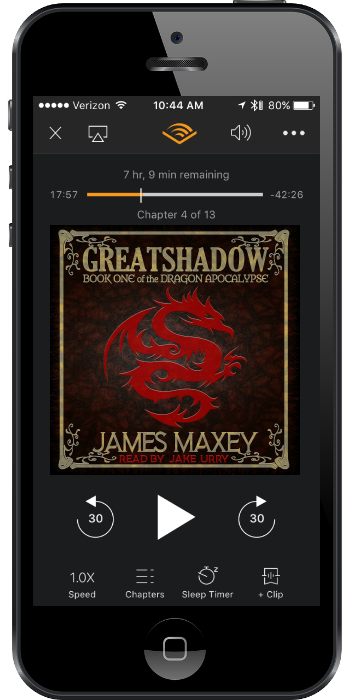 Greatshadow is the primal dragon of fire, an elemental evil whose malign intelligence spies upon mankind through every candle flame, waiting to devour any careless victim he can claim.

The Church of the Book has assembled a team of twelve battle-hardened adventurers to slay the dragon once and for all. But tensions run high between the leaders of the team who view the mission as a holy duty and the super-powered mercenaries who add power to their ranks, who view the mission primarily as a chance to claim Greatshadow’s vast treasure trove. If the warriors fail to slay the beast, will they doom mankind to death by fire?

James Maxey’s mother warned him if he read too many comic books, they would warp his mind. She was right. Now an adult who can’t stop daydreaming, James is unsuited for decent work and ekes out a pittance writing down demented fantasies about masked women, fiery dragons, and monkeys. Oh god, so many monkeys.

​In an effort to figure out how Superman could fly, James read a lot of science, books by Carl Sagan and Stephen Jay Gould and Stephen Hawking. Turns out, Superman probably wasn’t based on any factual information. Who would have guessed? Realizing it was possible to write science fiction without being constrained by the actual rules of science proved liberating for James, and led to the psuedo-science fiction of the Bitterwood series, superhero novels like Nobody Gets the Girl, and the steam-punk visions of Bad Wizard.

​In 2015, James was honored as the Piedmont Laureate by the United Arts Councils representing Orange County, Durham County, and Wake County. This is almost certainly a sign of the ongoing cultural decay gripping the nation.

​James lives in Hillsborough, North Carolina with his lovely and patient wife Cheryl and too many cats.

Jake Urry does it again!

My first book narrated by Jake Urry was a psychological thriller, and his way of narrating really got to me. I then listened to his performances of an occult thriller series; so when I found out that he was the narrator of Greatshadow, and fantasy being my favourite genre, I absolutely ‘had’ to listen to it.

Now, the brain is a funny organ: when starting Greatshadow, at first I couldn’t help but picturing Harlan Ulrich, the main protagonist from the occult thriller series. I hasten to add, that this is none of Jake Urry’s fault, his narration was immaculate, as I’ve come to expect from him. So, I had some serious talking to myself, and after a while, Ulrich faded, and Stagger and Infidel came to the fore.

Being an avid reader/listener of fantasy stories, I sometimes wonder what new stuff authors can still come up with, cause it seems I should have read it all by now.

Far from it! On the foreground, this is a book about mankind’s fight against the evil dragon, but there is so much more to it.

The world building is excellent, and the world is populated by very strong and different characters and fascinating races. The narrator’s perspective is a bit of a funny one, because he is dead. Yes, you read that right. And he isn’t the sort of ghost I would have expected, either, because he can still feel like a living being — only he can no longer act like one, which causes him a lot of frustration.

Then there’s Infidel, an invincible woman who doesn’t let anyone push her around.

There are mercenaries with various special abilities, there’s the knight in shining armour (and he isn’t as boring as I expected him to be, either). And of course there’s a representative of the church who claims to hold the one and only truth, and there’s his (and the church’s) antagonist, some sort of Antichrist. And then there’s the mysterious — well, sort of wise man, or wizard — who knows it all.

These are only the main characters, but the sidekicks are just as fascinating and memorable. I hope in a sequel we’ll get to know more about the Black Swan, for instance.

All these characters make for a hell of a mix in their common goal to slay Greatshadow, the most powerful dragon on earth, not least because their motivations for the mission are so very different.

The story is full of surprises, and it is funny in parts, too. The mix of action and reflection, disputes and building of friendships makes for great entertainment, and I highly recommend it.

I received this audiobook as part of my participation in a blog tour with Audiobookworm Promotions. The tour is being sponsored by Jake Urry. The gifting of this audiobook did not affect my opinion of it.

Seitenwinde
Reading for the Stars and Moon

Aug. 23rd:
Notes From ‘Round the Bend
Adventures Thru Wonderland

Apparently, June Is Audio Book Month, and so I was challenged yesterday. I like challenges, and maybe so do you, so I thought I’d spread the word.

Check out either website for more information. Tina’s explained it well here.

I’m now off to check out which of my audio books suit the challenge. If you’re interested, you may find some suggestions for great audio books on my blog. A good one will be posted tomorrow, so watch this space.

Mid June, and I’ve listened to:

Funny in Farsi (narrated by the author)

Brat Farrar  (narrator who has the same first initial as me)

That’s it. I listened to more books, but none that fit the above mentioned criteria. I’m currently listening to Christina Ricci’s rendition of ‘Little Women’, which would fit the ‘narrated by a famous actor’, but I won’t finish it this month. I’m job-hunting, so my listening time is somewhat reduced.

Harlan Ulrich seems out of luck, but then he meets a former high school pal who offers him free lodging for a week in Exeter House. All Harlan is supposed to do, is doing a couple of rounds through the still empty house, which is being renovated, to make sure that no squatters ruin the place.

Harlan moves into the model apartment which is fully furbished, and he thinks himself in heaven — until strange things happen. Harlan soon feels threatened, and although he tries hard, there is no logical explanation for the goings-on in the house come night.

With nowhere else to go at such short notice, Harlan decides to figure out what is happening, and faces the evil spirits.

I already thought The Sick House (The Ulrich Files #1) was creepy, but I was glad that I listened to about half of Medicine for the Dead in plain daylight!*

And then I made a mistake: I did what is my habit: I went to bed, listening to the book. And naturally, I couldn’t fall asleep. The story is super creepy, and I’m not just referring to the ghosts, or apparition, spirits or just visions — the things happening in real are what took my breath away and kept me from falling asleep. Oh, my, Harlan! There was absolutely no chance to fall asleep, or even stop listening until I knew the outcome! Let me give you one advice: don’t listen (or read) this book in bed! Jake Urry’s narration adds greatly to the effect, the creepy atmosphere, the terror Ulrich feels. It’s once again an excellent narration, transferring all the horror directly into your head. Well,maybe I’m especially susceptible, I don’t know. However, I think there’s an inherit fear of all things unknown and/or inexplicable in each of us, and Ambrose Ibsen’s story appeals to that fear — while Jake Urry does his best to make it seem real.

This is another great occult thriller, and I look forward to listening to book #3 (Darkside Blues) in that series. Watch this space, it will be part of a blog tour, and I’ll post my review on 2nd June.

*Although this is part of a series, each book can be read as stand-alone, no knowledge of other books in that series is required to understand and enjoy them.

About the Author: Ambrose Ibsen

Once upon a time, a young Ambrose Ibsen discovered a collection of ghost stories on his father’s bookshelf. He was never the same again.

Ambrose Ibsen has penned numerous horror and thriller titles, including The Ulrich Files, Transmission, The Demon-Hearted Series and the Winthrop House Series.

About the Narrator: Jake Urry

Don’t miss out on your chance to win a set of signed paperback copies of the Storm Trilogy. If you love reading, enjoy tales of adventure and heroism, this one’s for you. Prolific book blogger Dannii Elle has written an amazing review on the Trilogy, so before you decide, why not head over to her […]